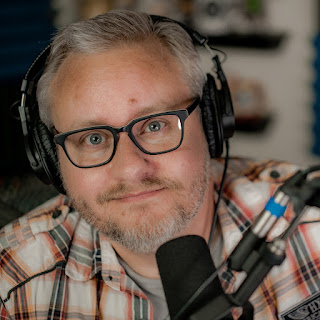 Regardless of the type of party, these three would always keep their pastoral thinking caps on. Every time, they’d talk about theology as if they were teens engrossed in the latest gossip. Jeff particularly liked expressing his doubts to Allen, while both men enjoyed being challenged by Melody’s female perspective.

Often enough, it didn’t take long for them to realize they weren’t the only ones in the conversation anymore. Other guests would be drawn to the conversation and chime in their thoughts. Before they knew it, the group was made up of several more people, all actively participating in a dialogue that easily connected serious material and just another good time.

It’s exactly this kind of vibe that Jeff, Allen, and Melody tried to create when they founded Irenicast.

A continuation of this theme, Irenicast was born. As of the date of this post, the podcast has more than 150 episodes across a variety of topics, ranging from lesser known theological perspectives to societal issues. As time passed, Melody eventually moved on to other endeavors, and three other co-hosts joined the team: Rev. Bonnie Rambob, Rev. Rajeev Rambob, and Pastor Casey Tinnin.

Unlike any other Progressive Christian podcast I’ve come across, I’m going to take the rest of this blog post to encourage my readers to check out this amazing find.

Obviously, there’s the fact that co-founder and co-host, Jeff, immediately agreed to an interview when I reached out. I literally fangirled when I saw his response on Twitter!

Well, I’d be lying if I said I didn’t fangirl on the phone call too, but I digress. (Thanks for your patience, Jeff!)

The diversity of the co-hosts is impressive. With a variety of ages, ethnicities, and gender, the Irenicast group aims to have equal participants. There’s co-founder and co-host “Information Sponge” Allen, who is “probably the smartest man” Jeff knows.

Then, for around the first 100 episodes of the show, there’s also “Worldly” Mona, who Jeff believes “is able to fit in any situation and really bring light to [it]”. Mona is a pseudonym for Melody, who worried about revealing her identity at first due to online sexism and fear for her safety.

Irenicast started around the same time when the Gamergate campaign was going strong. Wingfield (2014) explains that the campaign was meant to “discredit or intimidate outspoken critics of the male-dominated gaming industry and its culture.” Attacks specifically towards women increased at the time (Wingfield, 2014). Nevertheless, Mona bravely came forth as Melody – a video gamer herself – for the last few episodes she was on the show.

Then come the last three additions. In Jeff’s eyes, “Powerhouse” Bonnie can do anything. If there was a window in her forehead, one could see the wheels and cogs working in her brain as she draws connections between things in ways others normally wouldn’t.

Her husband, “Visionary” Rajeev, is apparently great at understanding big picture details. He’s also “able to balance gentleness and firmness in the way that he moves in the world”, a trait Jeff finds uncommon in others.

Then there's “Unabashedly Himself” Casey, whose “compassion is limitless”. Regardless of what he goes through, he’s always able to “move forward and show grace”, which makes him “one of the most amazing people” in Jeff’s life.

Finally, Jeff gives himself the title of “Administrator”, which sounds more basic than I think it should. I believe he should give himself more credit for how he uses his miscellaneous talents and values to “bring all [the] pieces together” to create the best show possible.

Recording episodes with all of these contributing hosts has been the highlight of Jeff’s day on more occasion than one. However, it’s the addition of the last three co-hosts that has reignited something spiritual in him.

“I’m at a point now where I put very little stock in things like miracles and divine appointments,” Jeff explains, “but the way that Rajeev, Bonnie, and Casey came to be on Irenicast is just one of those things that I would’ve used to call a God moment.”

More than just diversity in co-hosts, there’s also diversity in guests interviewed on the show. I remember being impressed with episode 144, where Trans Pastor and Author Rev. Lawrence T. Richardson was interviewed about gender identity and racism in the church (Manildi et al., 2019b).

In Jeff’s own words, he and Allen “were very aware that [Irenicast] was another podcast with two straight white males…putting our opinions out there”. They have an unofficial and flexible rule where they try to be mindful about the guests they choose in an effort to include as much variety and as few “straight white male guys” as possible.

“[I]t’s important for us,” adds Jeff, “to use whatever platform we have to bring in all kinds of voices.”

Diversity naturally brings about disagreements, but these co-hosts embody conflict resolution. The best example of this is episode 147, where the co-hosts disagreed on whether or not God acts based on our prayers (Manildi et al., 2019a). I could sense the tension and I wasn’t even in the conversation! Yet, by the end of the episode, the co-hosts came together and played the game chosen for the end of that episode (more on that later).

When I asked Jeff how he did this, he explains his own theological growth.

“[Being] in a conservative, evangelical circle,” Jeff answers, “everything had…the weight of the world on it…[E]very decision was life or death, or heaven or hell, and it was a slippery slope to something else. And I think because I hold my theology and ideas about God, at this point, so loosely – some might say too loosely – I’m not offended by a different idea and I think that helps me.”

As for the other co-hosts, while Jeff can’t speak for them, he gives me his best guess: “I think we all care about the work so much…that we’re kind of friends to conflict. In fact, we invite it because I think it makes the show better.”

I think I learn and am challenged more in each episode than I could over the course of a month attending any mainstream church. Some of my favorite topics covered include process theology, toxic masculinity, queer pastors, race, family structure, and that lively debate I just mentioned.

Apparently, I’m not the only one.

The show grows along with the co-hosts. With the first 100 episodes, Jeff, Allen, and Melody were going through the deconstruction process, taking apart their Christian lessons in order to examine the different pieces and choose what to discard.

Other Progressive Christian podcasts tend to remain at this step, but Irenicast has gone beyond to what Jeff identifies as “exploration”. After a much-needed break from the show to resolve personal matters and analyze the desire to continue, the show started up again stronger than ever before.

“I think we’ve landed at a place now,” Jeff explains, “where I really just appreciate the tone and majority of the show that we have and in the wide variety of new perspectives. But we wouldn’t have gotten to this place if it weren’t for [the deconstruction].”

With the exception of some, almost every episode ends with a game called a “segment”. From those I’ve listened to, these range from well-known ones, like Would You Rather, to made up ones.

I’m particularly fond of the one where everyone has to pick a random item and the others have to make a short sermon on the fly using that item as an analogy. I also like the one where each of them picks a pet peeve and they debate their stances on the issue.

(Rajeev, if you’re reading this, please remember that pizza is defined by its structure, not the toppings.)

According to Jeff, the games were inspired by the “youth pastor” in him and Allen. I can definitely see that as I always find myself literally laughing out loud!

Last but not least, Irenicast truly cares about their work and listeners. Those emails I mentioned earlier are an integral part to this care.

“We have, for lack of a better term, pastor’s hearts,” says Jeff. “We want to help people and educate people, move people forward…[W]e’ve had moments where we’re on edge and we’re like, ‘Ugh! We’ve got to do this.’ And then we get one of those letters and…honestly, it all fades away…[I]t’s like, ‘Okay. We were just reminded why we do this.’”

When I reached out, I wasn’t just trying to check off another blog post. Irenicast means something to me too. As a PK (Pastor’s Kids for those who don’t know), church is often more about work than spiritual fulfillment.

Where other congregants can sit back and enjoy, my mind is consistently running. I’m analyzing the microphone’s volume. I’m playing the guitar. I’m flipping through the Bible pages so I can read scripture at the pulpit.

It’s also difficult to have spiritual conversations with the pastor when she’s your mom. While I’m proud of her, I don’t want to stress her with my doubts or different perspectives. Just like the common saying that doctors can’t operate on their kids, I think the same applies for pastors.

A fan of uplifting podcasts on my way to work, one night I decided to search for Progressive Christian podcasts for my drive in the morning.

From the first episode, I was hooked on Irenicast. Suddenly, I had terms for my beliefs. I could relate to other Christians again. My faith grew from the standstill it had been at for a long time.

Now, I understand the show isn’t perfect. Nothing is and as Christians we’re warned against idolization. So, I’ll be honest and say I’ve actually taken a break from listening to Irenicast because I was overworking my mind too much.

In Jeff’s own words, “[T]he best part is just knowing that we make a difference.”

I can’t speak for all Irenifans, but when it comes to this blogger, Irenicast, you do.

Note: I’d be doing Jeff a disservice if I didn’t mention his other podcast, Divine Cinema. Before there was another podcast, there was only an episode with the punny title “Divine Sinema”, which was as a bonus episode when Irenicast took a break. This episode focused on reviewing God’s Not Dead, which Jeff finds is “just a really bad Christian movie”. Listeners responded positively so another bonus episode was done about the sequel.

Eventually, Irenicast gave birth to its subpodcast, Divine Cinema. This podcast reviews more than bad Christian movies, which Jeff believes would’ve been the death of him and co-hosts Adam and Dylan. However, they didn’t want to be like other podcasts either, those of which would try to “youth pastor” movies by trying to find a Christian analogy when there wasn’t one to begin with. Instead, Divine Cinema aims to review any film centered on the theme of faith – whether labeled as Christian or not – and reviews how it “express[es] that theology via the medium of film”.

Jeff Manildi is producer and co-host of two progressive Christian podcasts, Irenicast and Divine Cinema. In addition to getting his B.A. in Theology, he also received his ordination through the prestigious online organization of The Universal Life Church, whose alumni include the likes of Conan O’Brien and Dwayne “The Rock” Johnson.  Jeff loves all things that tell a story: people, movies, tv, music, comics, etc.  You can follow him on all the socials at @JeffManildi or listen to his podcasts at Irenicast.com and DivineCinema.net.

You can also check out the An Irenicon blog here.