My Testimony: The Summer I Learned Black Lives Matter TOO 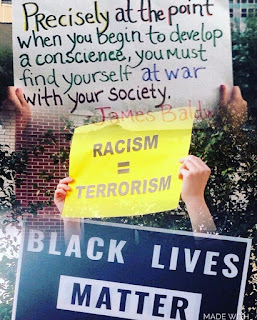 In the summer of 2016, I was brimming with energy to change the world! I was in my second missionary internship after recently graduating from college with an undergraduate degree in English Writing. Upon my return for the fall semester, I was going to start a graduate degree in Social Work.

So, one can imagine my enthusiasm when my supervisor took my roommate/co-intern and me to our first protest.

It was a Black Lives Matter rally and I had no idea what to expect. When we arrived, our supervisor warned us that if the police showed up and things got out of hand, we should run. She spoke as casually as a mother repeating house rules to her kids.

I heard her warning, but I’ll be honest that I was distracted. The writer, and future social worker, in me wanted to soak in every little detail.

The crowd gathered before a house turned community center. Surprisingly (to me at the time), there was a diverse crowd, from black community members to supportive members of other ethnic backgrounds, including Caucasian. I even remember two women, with fashionable headscarves, next to me speaking a Middle Eastern language. Plus, of course, my roommate and I were there, at least adding a speckle of Mexican and Puerto Rican into the mix.

On the front porch, several speakers took turns with a megaphone. I distinctly remember feeling captivated when an elderly gentleman shared how he was in the original Black Panther Party. As he shared his perspective on what had/hadn’t changed for his people across the decades, my stomach churned in guilt and my heart ached in a desire to act.

Another distinct memory was a woman, presumably a mother, who also spoke to the gatherers. While I don’t remember everything she said, I do remember her saying something along the lines of, “This isn’t a scary neighborhood. Families live here. Children live here.” I could hear her voice struggling not to crack under the weight of her words.

As we finally began to march, I noticed another detail I missed before. There was a man with a kind smile and a Free Hugs t-shirt standing by a nearby tree. I had heard of the Free Hugs movement and thought it was cool, albeit odd, that people were willing to offer physical (and hopefully safe) affection to random strangers. Still, I think I remember someone taking up the offer!

I also began to read people’s signs, which were usually funny, catchy, and/or moving. Some may have been vulgar, but these must have not seemed as important to me since I don’t remember any. One that did stick to my memory was similar to the title of an online article by Harden (2017), which states, “All lives can’t matter until Black lives matter.”

At one moment, I remember we stopped walking. We might have been waiting for a streetlight to change. In the meantime, a local teenager spoke passionately to us about continuing Martin Luther King Jr.’s dream. There was a rhythm to his words that captivated his little audience, reminiscent of his idol.

The chants were also powerful and catchy in general. The protestors were overall friendly too. When we were walking, we stayed on one side of the road so cars could pass on the other side. I was worried at first, but I tried to trust the divisions that I believe police put up themselves for everybody’s safety.

I had no reason to worry though! Almost all the cars slowed down for us. Besides, some of these cars honked at us, the driver waving in support. Passengers sometimes even rolled down windows to chant along with us, dancing as much as they could from the passenger seat with just their head, arms, and upper body visible to us.

I do want to note that not all marches or protests are this pleasant, though. I got lucky (or blessed? I know these are controversial terms). There are times when protests end in arrests, fights, violence, and other negative incidents with tough consequences. Nevertheless, we were peaceful, truly honoring Martin Luther King Jr.’s philosophy as best we could.

That led to quite a bit of growth for me that summer. For example, as my then significant other pointed out, being Latina didn’t make me a person of color (which I’m glad he pointed out was totally wrong for me to say). Sure, I had felt discrimination for being a woman, Latina, and bisexual. However, I never specifically faced discrimination because of the color of my skin.

In other words, I learned that I can be both oppressed and privileged.

As we come to a close on Black History Month, I’ve been reflecting on how inspired I was at my first protest. I was – and still am – overcome with the powerful and true meaning of the rally: marginalized and oppressed voices are just as important as privileged ones.

Please note I said, “just as important.” I didn’t say “more than”.

I still believe what I learned at that protest. All lives matter – yes! So do blue lives. However, black lives matter too and right now that’s the community that’s specifically facing serious discrimination, harassment, and violence because of the darker shades of their skin.

Let me really drive the lesson home by ending with an analogy.

The United States is like a classroom full of diverse students. All the students care about each other. All their voices matter. However, one of the students has been physically hurt by another. Bleeding and bruised, the hurt student raises a hand for attention. It’s not because the student doesn’t care about the others, but because in that moment emergency help is needed.

It’s time for us to collectively call on that hand.